Far away from Athens, but co-conspirator Tim Atherton has an exhibit titled Traces – alleyways and spandrels up at the McCullen Art Gallery in Edmonton through January 28. (That’s the Edmonton in Canada, for those who are geographically challenged.) 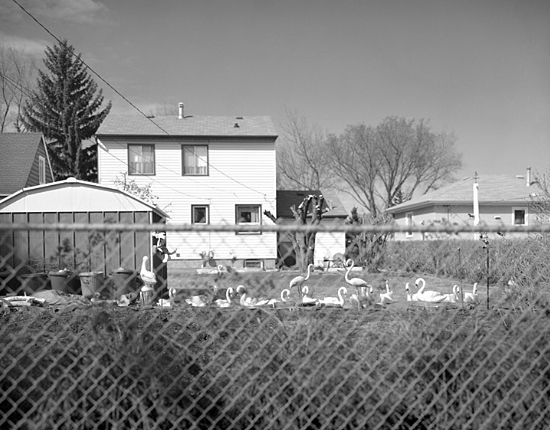 The set of images look at people’s lives from the backyard, the side of their homes they don’t expect to have looked at. From his description:

Edmonton’s 1100 km of urban and suburban alleyways are like the backbone of the city’s identity. Unnoticed and unregarded routes and pathways through the city, much of the time un-peopled yet full of the evidence of people.

Back yards often seem less regarded than front gardens, more off-guard and by the time the alley is reached, it is dustbins and recycling boxes, left over bricks and spare siding – every now and then punctuated by a garden of beauty and pride, unrestrained nature or some peculiar product of whimsy.

The alleyways are the pathways through the city’s identity. Still public, yet intimate. Domain of dog walkers, jogging soccer moms, garbage collectors, handymen repairing fences, ﬁerce old ladies on solitary walks, afternoon gardeners and schoolboys dreaming and imagining adventures. Yet all encountered only infrequently – more often it is the traces, the evidence of these lives that is encountered.

It’s an intriguing idea for a documentary project as he shows the ways in which the alleys wind around, hide and reveal. If you’re in the Edmonton area, well worth stopping in for a look. If you can’t make it to Canada, he has a gallery of the images up on his web site, as well, though I suspect the actual prints will look much better in person.