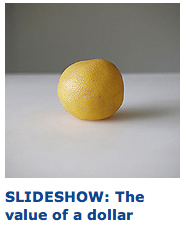 On American Public Radio’s Market Place last night, they did a story on photographer Jonathan Blaustein who has been photographing one dollar’s worth of food at a time. It’s an interesting project, not so much for its technical excellence or sophistication but as a visual documentation on what food costs.

On his site, Blaustein has a fuller set of images that are worth poking through.

I really love this execution of an ongoing documentary project. In one of my classes this semester we tried to have each student working on a documentary project of their choosing outside of their regular assignments and, to be honest, we had mixed success. Some have really great projects, some, I suspect, are frustrated with the assignment and annoyed with me for not defining it better. Which is a valid argument, I think, but also a little indicative of their background.

There are times when my current students are struggling and I take the blame for not teaching well enough. And there are times when I know the class is, well, being lazy. But there are other times when I think the blame falls on their elementary, middle and high school course work. They have been taught to a test for their entire lives–learn this because it’ll be on the test, and you have to pass the test to go on to the next grade/class/school. That’s not how life works and it is certainly not how my courses are constructed.

I want students who want to learn–just for the sake of learning. No other reason, just because they are curious, because they want to know, need to know, desperately have to know.

For the record, those students that pair that desperation with an equal desire to share what they know are the ones who become the best journalists.