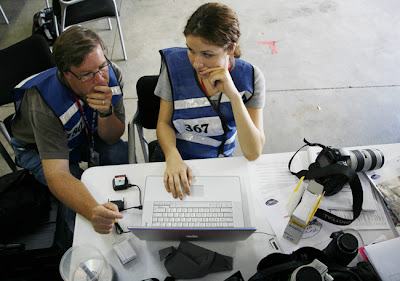 Yep, for the second year Grady College students spent a day covering the ten-hour (or 1000 miles) sports car race sanctioned by the American Le Mans Series. Three editors worked with them throughout the day – helping with critiques of their work and shooting alongside them around the course. 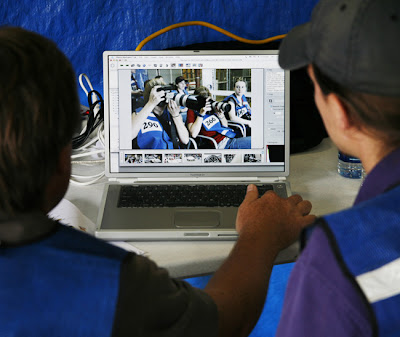 The idea is fairly straightforward – given the length of the event, students can shoot for an hour or two, then come into a make-shift newsroom to download their cards, have an editor critique their work and then go right back out and apply what they’d talked about.
Each student ended up having between three and five editing sessions and the growth throughout the day was amazing.

The Petit Le Mans is a huge event – it’s one of the three major endurance races in the world and brings more than 60,000 people to the track. With manufacturers like Audi, Porsche, Ferrari, Acura, Maseratti and Panoz on the track, it’s a high-stakes race and a massive event. Through the assistance of John Evenson from the American Le Mans Series, students were fully credentialed and given complete access to the course, garage and pit areas. If a journalist was allowed to go there, so were the students. 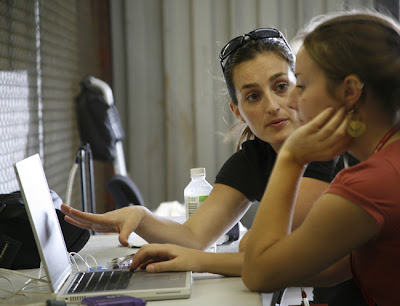 The professionals who worked with the students are all veterans of the industry and past UGA workshops. Mike Haskey, chief photographer from the Columbus (Ga.) Ledger-Enquirer, is now five-for-five as an editor. Robin Nathan, from the Gainesville (Ga.) Times, and Woody Marshall, photo editor of the Macon (Ga.) Telegraph, worked their event with the students.

Funding for the event was provided by the Georgia Press Association and technical support, including the loan of several long lenses for the students to use, came from Fred Metzler at Canon. 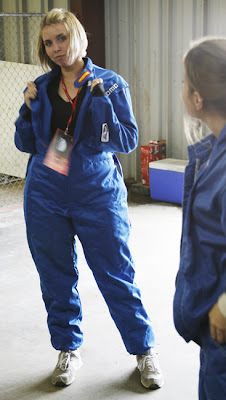 As editors went through the student’s work, they pulled out the best work which we sent over to the ALMS media center for posting on their web site alongside race updates.

By the end of the 17-hours-long day, students had shot more than 40 gigabytes worth of images. They’d practiced pans, stop-action and night photography. They’d worked pit road and the photo openings along the fence. They flew in helicopters over the track and worked angles with 600 mm lenses.

And they moved from being intimidated by the scope and spectacle of a major auto racing event to being comfortable in their fireproof suits to go over the wall and onto pit road.