It has been a … challenging … few weeks for me. That old adage about that which doesn’t kill you makes you stronger? I’m hoping it’s true.

As the spring semester wrapped up, the course evaluations came in and I spent some time studying them as I always do. They were off a little from where they usually are, one or two students can make a big swing in the small classes I teach. I’m okay with them now, most of the comments fall in line with what the previous 19 semesters said.

One thing that has popped up from time to time has stuck with me, though. Every now and then a student will comment that I’m not receptive to different ideas. The mature/experienced/cynical side of me could dismiss this as being an immature/inexperienced/narcissistic student being offended when I hinted that their idea wasn’t well thought out. (It happens.)

But it’s that recurring comment, once a year or so, that really resonates with me. As a journalist, isn’t my responsibility to pursue all angles, all stories, to see where they lead? Am I really shutting people down in my class, limiting the inputs of some students, perhaps stifling them? Are there ideas that, if I let them play out a little longer, would bring something of value to the discussion?

I wrestle with that, a lot. I tell my kids it’s not my job to teach, it’s my job to help them learn – and those are two distinctly different goals. Have I been smothering someone’s learning?

And is this something I’ve done elsewhere, believing there’s One Story to tell and that’s it? I … I fear it may be true.

That challenging comment up top? It hasn’t been anything earth shattering – my job is secure, my family is healthy. But I have been wrestling with some things and part of it gets to this One Story idea.

My childhood – which I admit I have totally romanticized and I’m okay with that – featured a lot of summer camping trips. We’d hook up our trailer in mid-June and disappear from Massachusetts for most of the summer, rolling in just before school started again. My memories of this are awesome – new places, new people, new things to learn, new things to experience.

It turns out that, while my brother and I have great memories of KOA Kampgrounds, my mother hated this. When I married eight years ago, I wanted the experience from my memories for my step kids. The story I’d told myself (and anyone else who would listen) was what I tried to recreate. 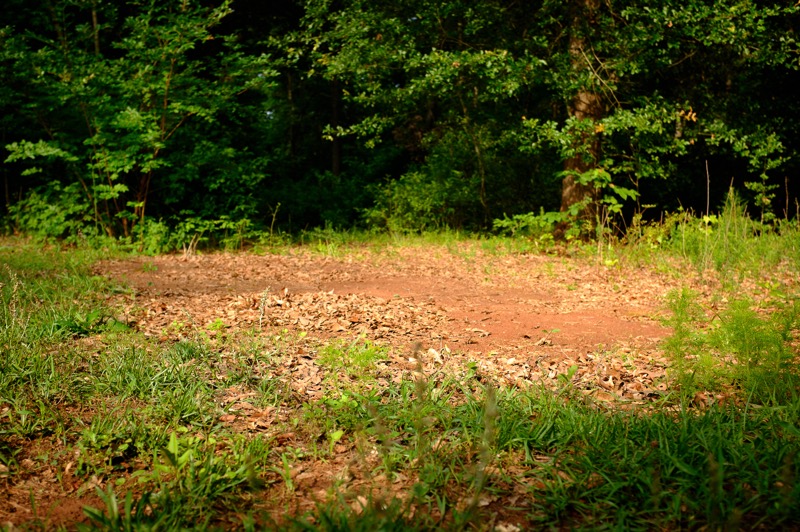 In 2009, after a months-long search for the perfect camper, we stumbled into one at a great price. That photo to the left? That’s the space where it was parked for six years. Last week, we sold it.

It turned out the One Story I had of my youth, of how great time on the road was, didn’t fit the story of my family. Their needs and desires are different than mine may have been as a child. We didn’t use the camper at all in the last two years, it sat, covered, in the backyard, just in view from my office window. When we told the kids we were selling it, neither expressed any concern.

My One Story about childhood adventures doesn’t fit them.

And, intellectually, I’m okay with this.

So, back to journalism and teaching … there’s a story thread that weaves through my courses. It’s a journey, I have an endpoint and waypoints in mind when we start. There are lots of tangents, for sure, most of them triggered by students comments and queries – but there’s no AAA TripTik. Balancing when to let them wander down a path and when to point them back to the main trail is a delicate act.

A teacher is supposed to be the expert – the hired guide, the one who will get you somewhere and keep you safe. A professor is a little different – someone who will point you down the path but maybe not lead you so much, to give you a little more room to explore.

As a parent, it’s a similar structure – get them somewhere, keep them safe and give them some room to explore.

How does this all fit into journalism and why is it coming up today? The video below, a TED talk delivered in 2009 (right around the time we bought our camper, coincidentally) dives deeply into the Danger of a Single Story. Novelist Chimamanda Adichie talks about her journey from Nigeria to the United States and the effect of the one story perception.

A a journalist, journalism professor and parent, it’s a good reminder to look beyond the One Story.