There’s a pretty big discussion going on in various online spaces about the front page of Friday’s Washington Post. The image is of a jet taking off from Reagan National Airport and crossing over the 14th Street Bridge, the site of a crash 30 years ago. 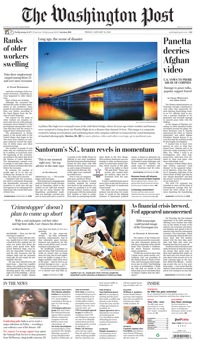 The problem? Here’s a segment of the caption:

This image is a composite created by taking several photos and combining them with computer software to transcend the visual limitations of standard photography.

Steve Myers at the Poynter Institute has a good summation on the issue, with some of the issues involved. The National Press Photographers Association’s listserv has been lit up with the discussion, too. (You’ll need to subscribe to see the archive, but you should be subscribed, anyway.) NPPA President Sean Elliot chimed in with this:

Even with the disclaimer in the caption the reality is that the photo is not “reality”, and it had to go through steps to create an image that is “better” than reality. That in itself is deceptive. It may not be a malicious intent, but it does not change the fact that if the standard to which we’re aspiring is one where our work is accepted as honest then any time an image is created in this way it degrades the battle to respect that integrity.

There’s a segment of the debate that has asked whether, given the expanded dynamic range of modern cameras, compositing a photo like this is something acceptable. I’ll accept that modern cameras can do more things, perhaps even capture such a wide range of tones, but the simple fact – to me – is that a photograph is one slice of time. When you layer segments of time on top of another layer of time, you don’t have one slice of time.

Let me put it in a textual situation. At a political rally a candidate says the following two things:

I believe that a strong America needs to support higher education and break down the financial barriers of attaining it.

I believe that a strong America needs to keep its borders open but control the flow so that only those qualified, by historical standards, are allowed in.

I believe that a strong America needs to support higher education but control the flow so that only those qualified, by historical standards, are allowed in.

Got a problem with that?

News is news. News is accurate. A composite photo, regardless of the intent, is not a news photo – it’s a photo illustration. It should be marked as such and, you know, probably shouldn’t be on the front page of the Washington Post.