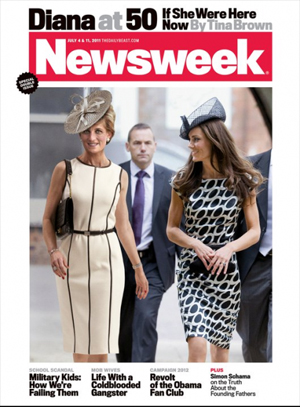 This is bordering on the macabre … Newsweek has a cover story that looks at what life for Princess Diana is like at 50. Remember that she was killed by a drunk driver in 1997.

Looking back on the lives of celebrities who died young is not a new thing. Even creating an image to show what they might have looked like had they lived longer isn’t that unusual.

But creating that image and compositing it with a current photo of her son’s new bride is, well … darn creepy. As is having her clutching a piece of current technology (note the iPhone 4 in white).

And if you go so far as to read Tina Brown’s fictionalization, it’s not a very pretty picture of her.

Charles Apple writes on the topic under the headline of “Prepare to be revolted …” And CNN’s This Just In blog takes them to task, as well.

I’m thinking my free subscription to Newsweek may be overpriced.