There are certain times of year that, I’ll be honest, I dreaded as a working photojournalist. While at the (now renamed) Middlesex News in Massachusetts, we covered something like 33 high schools. Which meant a lot of variety for Friday night football (cold or dark or cold and dark) and high school basketball. 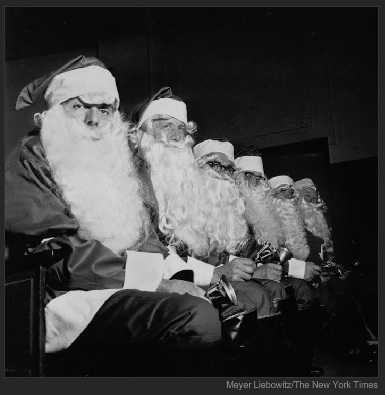 It also meant we covered 33 high school graduations. And, believe it or not, 33 high school proms. I never even went to my own prom, but there was a May evening that I hit five. Ugh.

Another of my not-so-favorite things was the Santa at the mall/Santa at the school/Santa at the senior center/Santa on the town square/Santa on a parade float/Santa jumping out of a plane (okay, I never did that one, so it may have been good).

So it was with a bit of trepidation that I clicked through a collection of Santa photos on the New York Times‘ Lens blog this morning. Why do old Santa photos look just a little bit cooler?

Okay, not all of these are great, but several have a classic feel to them and I wonder if it’s because they’re old, because of the style they were shot in or if it’s just that desire for larger format images I sometimes admit to.

So, for those of you hunting Santas in the next two weeks, happy shooting.