Every magazine photo editor (and newspaper and wire service editor, too) makes a mistake at some point in their life. At the bad end of the scale are the days when you doctor someone’s teeth or move a pyramid to fit a cover. But the other end of the scale can be just as damaging at times, when it’s minor picture selections that mislead your readers.

In the July 2/July 9 issue of Newsweek is an article titled, “The Fading Forests of the Sea (different photos used online than in print).” In it, the author (Matthew Phillips) talks about how a one degree Celsius change in ocean temperature can have a dramatic – and disastrous – effect on sea life. As an example, he talks about the changes to the Great Barrier Reef in Australia. When the temperature rises, “coral polyps become stressed and expel the (vibrantly colored) algae, causing the coral to bleach and eventually die.”

Two photos accompany the article, cropped to the same dimensions and shown side-by-side. The first is of the Great Barrier Reef in 1996: 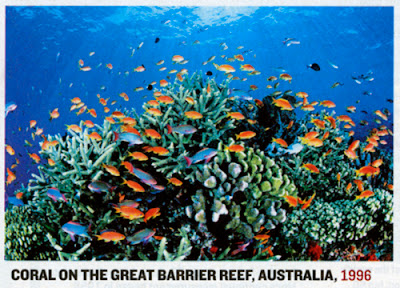 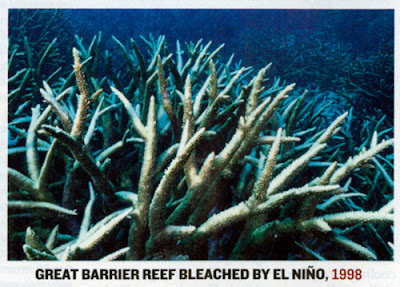 Pretty dramatic, eh? Look at all that vibrant color that Gary Bell (from Oceanwideimages) has captured, and then look at how little there is in the second photo. We must do something or this is what will happen.

But look again. Where is the color coming from in the first image? It’s coming from the fish – not the coral. If you look closely, you’ll see the coral is fairly monochromatic – just as it is in the second image.

So how did this happen? Photographer Bell did nothing unethical here – his agency provided images of the reef. The photo editor probably didn’t have any malicious intent, either – they needed a pair of images to show before and after effects. But the editing is dishonest – the dramatic tension is false.

As editors, we owe it to our readers to tell them the truth, to show them the facts and let them judge for themselves. Newsweek has failed its readers – not through a manipulation of an image, but through the selection of images. Photo editors can mislead as much as photographers.

P.S. – The online site gets worse, making reference to “Ford Hummers” in a caption. Hummer is a brand, not a vehicle line. And it’s owned by General Motors, not Ford. Ugh.