I have lamented the loss of photo editors before, too many times over the years to count. But the evidence continues to pile up that with no one trained in the art and science of visual communication in positions of authority we are undermining all of journalism’s credibility.

You will recall my tirades against my local publication, the Athens Banner-Herald, – first for lying with visuals about tornadoes in Georgia and more recently for lying about the location of a missing child. 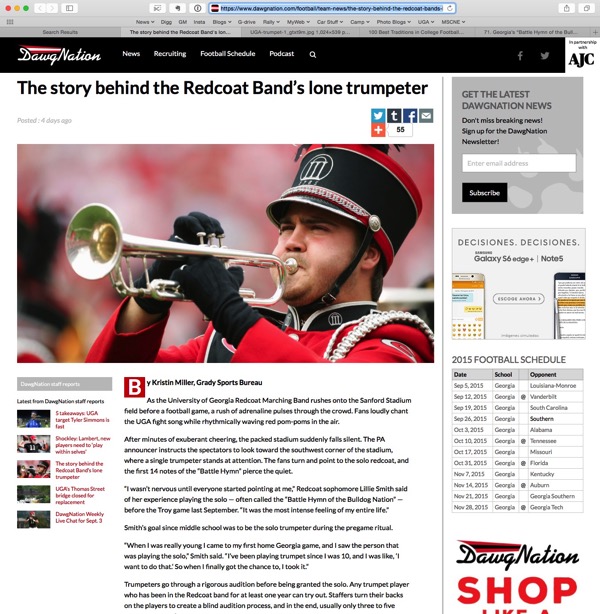 Now, the news organization that once covered the entire state has joined in through their sports spinoff that covers the University of Georgia, DawgNation. The photo staff of the parent Atlanta Journal-Constitution has been decimated over the years and, last Friday, clear evidence of the results emerged.

Displayed with a feature story (written by a Grady College student) about the UGA Redcoat Marching Band’s lone trumpeter is a photo of a male member of the Redcoats playing trumpet. Depending on how you look at the site, you may or may not see a credit line but I have yet to find a caption.

Some things that struck me:

Three quick lies in succession – the photo isn’t from the southwest corner of the stadium, it isn’t a single/lone trumpeter and the gender is wrong. A caption would have cleared up at least one of those lies easily – they hadn’t played a game this season with Ms. Smith as the trumpeter so using a file photo of a previous year’s lone trumpeter would have been ethically and visually fine.

But they didn’t caption the photo, leaving us to believe this is a lone trumpeter from a (relatively) recent game. Which he isn’t.

The skeptic in me started the search. Here’s what I did and what I found.

I pulled the direct link to the photo and did a reverse Google image search. That gave me a link to a 2012 usage of the photo, which had the photographer’s name and afffiliation on it.

A band member of the Georgia Bulldogs plays his trumpet before the game against the Tennessee Volunteers at Sanford Stadium on October 9, 2004 in Athens, Georgia. Tennessee won 19-14.

You’ll see why searching for “Redcoat” didn’t find anything, because the photographer didn’t get the caption right. But what’s more troubling is how old the photo is – it’s from eleven years ago. When the oldest of our current marchers were probably still in elementary school.

This is a lie – the Atlanta Journal-Constitution and its subsidiary, DawgNation, abdicated their responsibility to tell the truth.

Or maybe that isn’t their responsibility anymore. I searched for a mission statement for the Journal-Constitution and couldn’t find one. So I went up a level to their parent organization, the Cox Media Group, and found their vision statement:

At CMG, we want to be the most essential local media source in our markets. We deliver great products that connect with the needs of our customers, and we are evolving our super brands into the digital future. Collectively, we compete with our products and win with our people.

Nowhere is the basic tenet of journalism – to seek truth and report it – found.

If the news organization that once claimed it “Covers Dixie like the Dew” doesn’t care about telling the truth … then that dew will turn to mildew in time.