Putting on my ranting cap …

As a journalist, journalism educator, parent and generally presentable guy, I abhor lying. If you lie to me once, I will always suspect you are lying to me. It doesn’t matter how big or how little that original deception was, in the back of my mind there will always be a little bell ringing whenever you tell me something. I know you won’t always be lying, and it’s entirely possible you will never do it again, but once it happens, that suspicion will always be there.

Up at the Albany (N.Y.) Times-Union, Thomas Palmer has been acting as the Picture Prosecutor, taking news organizations to task for stupid photo choices. (My personal favorite, that I co-opted and expanded for my class, was on the the classroom from hell.)

But this morning, as I ate my Frosted Mini Wheats, sipped my orange juice and tapped my way through my local news organization’s site, my rage bubbled up.

4 twisters confirmed in Georgia after weekend storms read the headline on the Associated Press story. And the photo alongside it was dramatic. 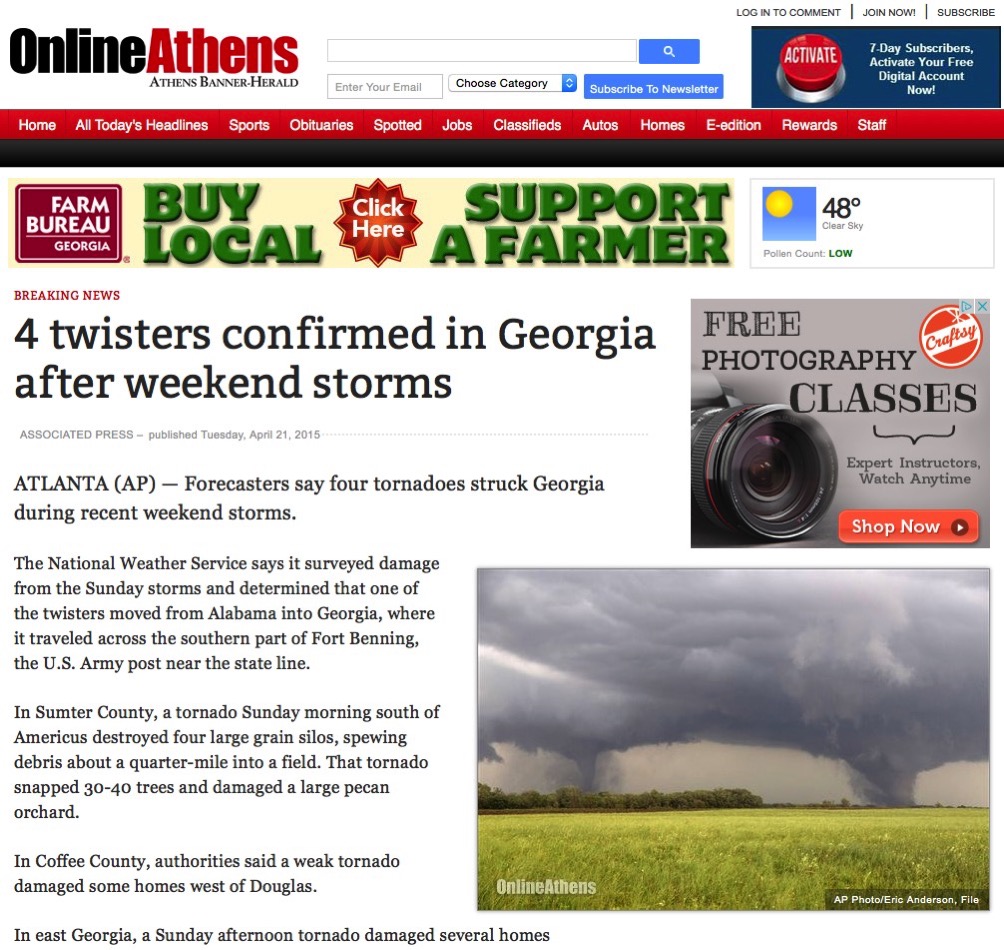 Look at that: An AP wire photo that shows TWO of the FOUR tornados. And, since it was from this past weekend, they even labeled it as a file photo. But there was no caption on the photo, which seemed a little odd, didn’t it?

And that image looked … familiar. So I did a quick search, dropping AP Photo Eric Anderson tornado into a search box and quickly learned why it was familiar.

I’d seen the photo before. Not earlier this week, not last weekend when the tornados were touching down.

June of 2014, to be precise, and the image was so powerful National Geographic had picked it up as well as the Denver Post.

The photo, as presented to readers of the Athens Banner-Herald this morning, was a lie. It implied two tornados had touched down within miles of each other at the same moment in time in Georgia last weekend.

The tornados pictured happened almost a year ago and more than 1,100 miles away.

That’s lying. That’s using a powerful image to draw attention to something it does not represent. It’s akin to taking a high school yearbook quote and inserting it into a story as if the politician spoke it the night before.

You would never do that, would you?

SO WHY WOULD YOU LIE VISUALLY?

The Morris Communication Company’s Code of Ethics does not deal directly with newsroom ethics, acting as a more general business code. What is the consequence of deception? And what should it be?

The credibility of our industry is one of the few things we should be able to control. Market forces, reader attention spans and advertiser wanderings are things we’d like to control but, realistically, we can’t.

But we do control what we publish – and what we publish must be both accurate and truthful. If it isn’t, then what’s the point? The First Amendment protects freedom of speech, it doesn’t protect a freedom to lie.

UPDATE: As of 10:40 a.m., the Athens Banner-Herald has removed the photo. They did not post a correction or explanation, so add in a transparency issue to my above rant.

UPDATE: A correction has now been appended to the story that satisfactorily explains the problem with the original image and why it was removed.