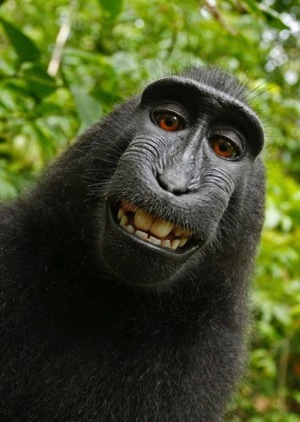 You know the old line about how enough monkeys with enough cameras can make any photo … well, it happened with this photo of a crested black macaque that photographed itself.

There’s been some controversy over the image as the photographer who traveled to Indonesia and owned the camera that was used to make the image claimed copyright ownership … except, copyright is given to whoever makes the image, now who owns the camera. Which would mean the monkey owns the image … except, the U.S. Copyright Office has said that only a human can own a copyright putting the image immediately into the public domain.

So, if you give enough monkeys enough cameras, we all get to use their works.