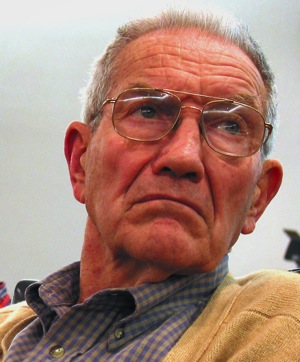 There are a few certifiable legends in our industry and, early this morning, we lost one of them – Robert E. Gilka has passed.

Everyone who met him has a Mr. Gilka story, anyone who wasn’t graced by a meeting has a story, too. You don’t spend nearly three decades leading National Geographic’s photo staff without touching a lot of people.

For me, it started in the early 1990s when he was teaching as at Syracuse University. There are a handful of people who scare me professionally or academically – he was one of them. I was so afraid of disappointing him, of not being good enough in his eyes. I wasn’t, but it didn’t matter – he chewed me out enough to make me better and I’ll never forget that.

I had a second chance years later when I returned to Syracuse for grad school as he was a perennial judge for the Alexia Competition. Sitting in a darkened auditorium, passing judgement on a portfolio of Appalachian family portraits, he bellowed out, “Why the hell are all poor people in black and white?”

Another defining moment – my world is in color. Hopefully as colorful as Professor Gilka was.