That, it would seem, is the new question. Elliot Spagat at the Orange County Register has a story about how the San Diego police chief is issuing, or not issuing, press passes to some members of the “media.”

There are several questions that need to be answered here, the first of which is should journalists even be issued media credentials by a government agency. To which my answer is … I don’t know. 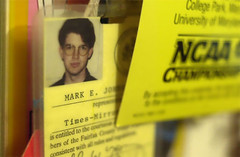 I have been issued and worn credentials from police departments and other agencies and I suppose they were handy. The argument being made here is they allow access behind the yellow tape that gets strung up at incidents, though I have to admit I don’t think I was ever allowed beyond that tape just because I was wearing an official credential. The few times I was allowed past it probably had more to do with who I knew – and that they trusted me not to do something stupid, like corrupt a crime scene or trip over a fire hose.

So, should a government agency be in the business of determining who is and who is not a journalist? Uh, no. That’s kind of a violation of the First Amendment (not exactly, not fully, but kind of.

Should a government agency establish some way of easily identifying members of the media they have come into contact with? Perhaps. That contact would allow the journalist and the agency to understand what’s okay and what’s not in various situations.

So should that then allow more contact than the general public? Hrmmm … I would probably lean against that. Because as soon as you say this person gets access and that one doesn’t, then you’re into the role of determining who is a journalist and who isn’t, which means you’re deciding what information some people get and others do not.

“If everybody is precluded from observing, photographing, writing about it, then at the end of the day we don’t have a very transparent government and the public loses,” Osterreicher said. “If you limit it too much, then you exclude a lot of people out there who practice journalism but don’t fall in the traditional definition.”

And that’s where this issue comes to a head: the traditional definition of a journalist is no longer adequate.

So, the solution? Act professional and get to know those you cover. Not in a social way, but in a professional way. In more than a dozen years of shooting, I never had a run in with any law enforcement officer. I will admit I didn’t cover as much breaking news as many of my colleagues, but I covered my fair share of fires, shootings and missing children.

And never once did I need a credential to tell the story my audience needed to see.