It’s a classic post topic – let’s argue about some small, mechanical aspect of photography, which will get everyone riled up and generate lots of traffic. Even better if we take some shortcuts in the initial post, giving us the opportunity to craft a second one, generating even more comment traffic.

I just didn’t think The New York Times’ David Pogue would stoop to it. In general, I really like what he writes about and the way he makes some pretty technical things approachable to the average reader, yet still goes deep enough to satisfy the geeks in the audience.

But, well, in the above post and even his follow-up, he gets some language wrong and that causes all sorts of problems. For me, at least, which allows me to make this post poking at his post, though I have no assurance mine will generate any traffic.

So, my short version … you can’t use the phrases bokeh and depth of field interchangeably. The latter is a measure of the area in an image, in a parallel plane to the sensor, that is deemed to be acceptably sharp.

Bokeh is an artsy term to describe, ahem, the quality of the rendering of the out of focus area in an image. Bokeh is controlled not by focal length, but by the number of blades an aperture opening has. More blades, in general, that come together in a smoother edge, will generate a smoother, more pleasing bokeh.

Now, depth of field is controlled by a couple of things – aperture, focal length and camera to subject distance. Wider aperture openings, that collect more light, give you shallower depth of field (throwing backgrounds out of focus, where you can then argue about the loveliness of the bokeh, but if it’s shot with a Leica lens, it automatically wins).

The shorter the focal length, the wider the field of view you will have and the more depth of field you will appear to have. Appear is the operative word there, because this is tied into the issue of camera to subject distance – and here’s where sensor size gets thrown into the mix.

Let’s take a quick look at a comparison between two images I just made: 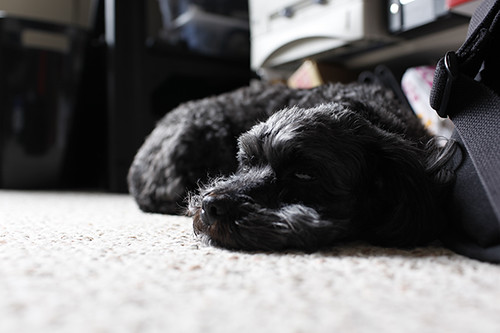 This first one was made on a Canon 5D Mark II with a lens that has a focal length of 35 mm set at f/4.0. The 5D is a “full frame” camera, meaning that the sensor size is the same as an old piece of 35 mm film. Look at how sharp the bottom of the laser printer is at the top, center of the frame. 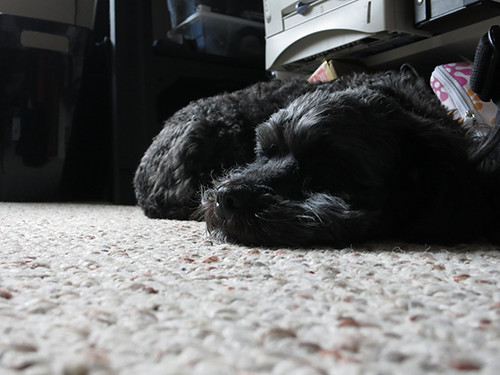 This second image was made on a Canon S100, a fairly common point-and-shoot type camera that has a much smaller sensor. Shooting from the same location (camera-to-subject distance) and the same aperture (f/4.0), the focal length here is only 7.5 mm – a much shorter focal length, but equally as wide in field of view. Now look at that same laser printer behind my dog – much sharper, isn’t it?

In order to cast a circle large enough to cover the chip on the full frame camera, the lens has to be much larger – giving you a longer focal length. With the small sensor in the point-and-shoot camera, you can have a much smaller lens, with a much smaller focal length, for an equivalent field of view. But because focal length has an affect on depth of field, your images from the compact camera will have much more depth of field at any given aperture and camera to subject distance.

So, does this matter? Well, that depends on what you shoot. If you make images of landscapes, where you want everything in focus, then it doesn’t matter that much. But if you want to separate out your primary subject from the backgrounds, then it does matter. A lot.

And that’s the “professional” look Pogue mentions in his columns. A professional is looking to establish a strong visual hierarchy in her images, so the reader – who is coming to this cold, with no prior knowledge, can find their way through the image. Most photographers who are using compact cameras are shooting for themselves or their families, so there is some prior knowledge about the situation. The visual hierarchy isn’t as important in that scenario because part of the story is already known.

And now you know why what I really want is a full-frame compact camera, sort of like the Sony RX-1 that started Pogue down this path. But that’s not quite the camera I want …