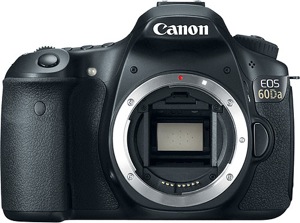 Canon has announced a new version of one of its prosumer models, the EOS 60Da – a model specifically designed for astrophotography.

From the Canon web site:

To capture the full range of colors given off by diffuse nebulae in the sky, the EOS 60Da features a specially tailored infrared blocking filter that allows the light normally blocked by a typical DSLR’s filter to be captured by the camera’s sensor. This means that the reddish hydrogen-alpha (Hα) light (656nm) gasses unseen by a normal DSLR are captured brightly and clearly on the EOS 60Da. With its modified infrared blocking filter, the EOS 60Da captures approximately 3x the hydrogen-alpha (Hα) rays than the EOS 60D, resulting in astrophotography that is sharper, clearer and more accurate in the depiction of naturally occurring reddish hues of diffuse nebulae.