I never really thought about the Consumer Electronics Show as being a big camera event, but there have been two announcements so far that have me … intrigued. 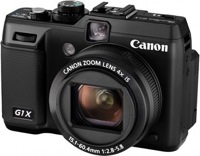 First, Canon has introduced a G1 X – a large sensor compact zoom camera. At $800, it’ll sit at the top of the Canon point and shoot line and features a 14 megapixel chip that measures 18.7 mm by 14 mm, pretty close to the APS-C chips used in other Canon DSLRs.

The G12 remains in the lineup.

Second, Fujifilm has announced the X-Pro1, a mirrorless interchangeable lens camera similar to the micro four thirds cameras from Panasonic and Olympus. They’re releasing three lenses with it next month – an 18 mm f/2, 35 mm f/1.4 and 60 mm f/2.4. (Increase the focal lengths by about 30% to get the 35 mm equivalents.)

Of the two, the Fujifilm interests me more, but I’m disappointed no one else is building into the micro four-thirds format. It’s pretty close, why not build within a standard?

May be time to auction a child off …