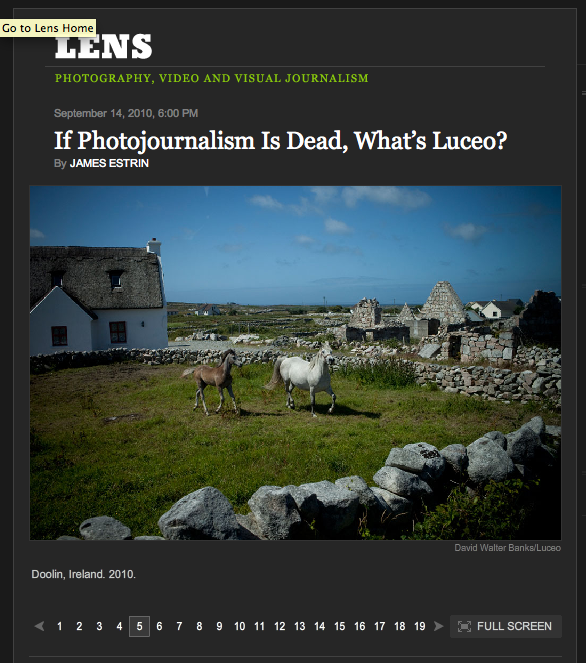 As promised, here’s the optimism for today … on the New York Times‘ Lens blog, James Estrin writes about Luzeo Images, a photojournalism collective founded by several UGA Photojournalism alumni, and how they are combatting the “photojournalism is dead” mantra we’ve been hearing since … um … 1930?

No, wait, then we had the Farm Securities Administration work … 1936? No, that’s when the beloved Life magazine relaunched as we know it … 1951? The first live transcontinental television broadcast? No, because we had the great Civil Rights and Vietnam War images … 1972 when Life ceased weekly publication? No, because we had David Burnett’s images from Iran in 1980 … hmm … ahh, the Internet! That killed photojournalism! Except we now can see more of it … The recession? The iPhone? RSS readers? Your mom?

Kill me, kill my academic peers, kill all of our students and kill every working pro out there and … well, some kid is going to find a copy of W. Eugene Smith’s Country Doctor essay and get excited about pictures, stories and photojournalism. We’re like a nasty parasite – you can’t kill photojournalism.

(Thanks to student Lane Johnson and pro Gary Chapman, as well as 297 people on Twitter (and my own RSS reader) for the link.)